What is Real Italian Pizza? 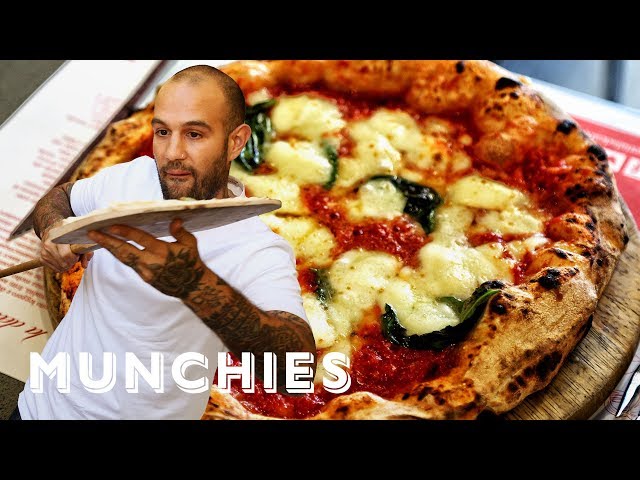 Real Italian Pizza is made with fresh, high-quality ingredients and cooked in a wood-fired oven. It’s a simple, yet delicious, dish that can be enjoyed by everyone.

Pizza is a savory dish of Italian origin, consisting of a usually round, flattened base of leavened wheat-based dough topped with tomatoes, cheese, and often various other ingredients such as meat, vegetables or condiments. A small pizza is sometimes called a pizzetta.

Pizza is a dish of Italian origin, consisting of a flatbread typically topped with tomatoes, cheese, and various other ingredients. The word “pizza” was first documented in a Latin manuscript from Gaeta in Central Italy’s Lazio region in the 10th century. Modern pizza evolved from similar flatbread dishes in Naples, Italy, in the 18th or early 19th century. The precursor of pizza was probably the focaccia, a flat bread known to the Romans as panis focacius, to which toppings were then added.

Pizza is a dish of Italian origin, consisting of a flatbread typically topped with tomato sauce and cheese and baked in an oven. It can also be topped with additional toppings such as meats, vegetables, and condiments. The word “pizza” was first documented in 997 AD in Gaeta, Italy, and successively in different parts of Central and Southern Italy. The precursor of pizza was probably the focaccia, a flatbread known to the Romans as panis focacius, to which toppings were then added.

Pizza came to America with Italian immigrants in the late 19th century and became popular in the early 20th century. Today, it is one of the most popular foods in the world, with many different varieties available.

Types of pizza include:
–Neapolitan pizza This is the basic type of pizza from Naples, made with tomatoes, mozzarella cheese and basil.
–Margherita pizza A variation on the Neapolitan pizza, this features tomatoes, mozzarella cheese and basil leaves arranged on top of the pizza like a flower.
-Marinara pizza: This is similar to the Margherita pizza but without the Mozzarella Cheese
-White pizza: This pizza features no tomato sauce; instead it is topped with garlic, olive oil, and sometimes ricotta or Parmesan cheese.

How to make pizza

In Italy, there are strict guidelines that must be followed in order to make authentic pizza. True Italian pizza is made with only a few simple ingredients: dough, tomatoes, mozzarella cheese olive oil, and salt. The dough must be cooked for 60-90 seconds in a wood-fired oven that is reaching a temperature between 430-480C°. Anything more than that and the pizza will become overcooked and dry. Once it is taken out of the oven, the pizza should be eaten immediately.

What is real Italian pizza?

Pizza is a yeasted flatbread typically topped with tomato sauce and cheese and baked in an oven. It is commonly topped with a selection of meats, vegetables and condiments. The word pizza was first documented in A.D. 997 in Gaeta and successively in different parts of Central and Southern Italy. Pizza was mainly eaten in Italy and by emigrants from there. This dish gained popularity among the lower classes in Naples during the 18th century.[1]

Pizza became popular for workers during the industrial revolution as a convenient lunch option. Pizza bases were often sold fresh to customers who would assemble their own toppings at home, or more frequently, added to cartons of pre-made sauces.[2]

In 1830, King Ferdinand of Bourbon visited Naples and he fell in love with the pizza which was named “pizza Margherita” after the Queen consort Margaret of Savoy.[3][4]

In 2009, upon the 150th anniversary of its unification, Italy launched a campaign to promote true Italian pizza called “Verace Pizza Napoletana” (VPN).[5][6] This initiative requires that pizzerias wanting to make Neapolitan pizza adhere to traditional methods used in the city of Naples.[7][8][9] For pizza to be granted VPN status, it must be made with San Marzano tomatoes,[10] grown on the slopes of Mount Vesuvius,[11][12] Mozzarella di Bufala Campana DOP (a buffalo mozzarella from the Campania region),[13] flour imported from Italy,[14] baked for 60–90 seconds[15] in a wood-fired oven at 485 °C (905 °F).[16][17].

The difference between American and Italian pizza

The ingredients of real Italian pizza

Pizza is a dish that is enjoyed all over the world, but it originated in Italy. Real Italian pizza is made with a few simple ingredients: dough, sauce, cheese, and toppings. The dough is usually thin and crispy, and the sauce is made with tomatoes. The cheese is typically mozzarella, although other cheeses can be used as well. The toppings can vary, but some common ones include mushrooms, onions, peppers, and sausage.

How to make a real Italian pizza

In order to make a real Italian pizza, there are several things that you need to keep in mind. First of all, the dough must be made with only flour, water, salt, and yeast. It should be left to rise for at least 24 hours. Secondly, the tomatoes used for the sauce must be peeled and crushed by hand. Lastly, the pizza must be cooked in a wood-fired oven.

The best pizza in Italy

Pizza is one of the most popular dishes in the world, and there is no shortage of opinions on what makes a “real” pizza. In Italy, there are many regional variations on the classic dish, and each one has its own devotees. Some say that the best pizza is to be found in Naples, where it was invented; others argue that the best pizzas are to be found in Rome or Florence. While there is no definitive answer, there are some undisputed facts about Italian pizza.

First and foremost, Italian pizza must be made with fresh, high-quality ingredients. The dough should be thin and easy to digest, and the toppings should be simple and seasonal. Pizza should always be cooked in a wood-fired oven, which gives it a unique flavor. Finally, pizza should be eaten with your hands – forks and knives are for amateurs!

The worst pizza in Italy

There’s no denying that pizza is one of Italy’s most beloved dishes. But, as with any dish, there are bound to be some controversial opinions on what makes a “real” Italian pizza. In fact, some people even argue that the worst pizza in Italy can be found in Naples – the city that is widely considered to be the birthplace of pizza!

Whether you love it or hate it, there’s no denying that Naples-style pizza is a unique take on this classic dish. If you’re ever in Italy, be sure to try it for yourself and see if you can understand why this type of pizza has such polarizing reviews!