Is Vegan Pizza Really Healthy for You? 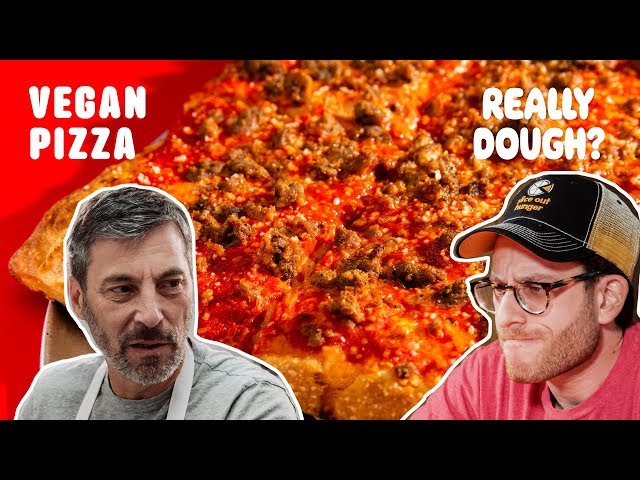 Is vegan pizza really healthy for you? There are a lot of conflicting opinions out there, so we did some research to find out the answer.

The vegan pizza is one of the healthiest options on this list. With plenty of fresh vegetables and herbs, creative sauce ideas, vegan pizzas are some the most delicious meals around! No greasy processed meat here either- just high quality plant based proteins that will have you feeling full without any unnecessary calories or fat.

A great option for anyone looking to eat healthier while still enjoying their favorite foods on occasion – not only does it taste amazing but pizza has never been more nutritious too!!

Pizza is a popular food all around the world, and there are endless ways to make it. You can put almost any toppings on pizza, and it can be made with different types of crusts. One type of pizza that has become popular in recent years is vegan pizza. But is vegan pizza healthy for you?

There are a few things to consider when determining whether vegan pizza is healthy for you. First, let’s look at what vegan pizza is. Vegan pizza is made without any animal products, which means it does not contain cheese or meat. Some vegans also avoid using white flour for the crust, opting for a whole wheat crust instead. Toppings on vegan pizza can include vegetables, fruits, nuts, and tofu.

If you are looking for a healthy option, choose a vegan pizza with a whole wheat crust and healthy toppings such as vegetables and fruits. Avoid pizzas with heavy sauces or lots of cheese. With careful choices, vegan pizza can be a healthy option for you!

The Case for Vegan Pizza

While vegan pizza is often marketed as a healthier alternative to traditional pizza, there are a few things to consider before deciding if it’s the right choice for you.

However, it’s important to note that not all vegan pizzas are created equal. Some may be higher in fat and calories than others, so it’s important to read the nutrition label before purchasing. Additionally, vegan cheese may not always be as nutritious as traditional cheese, so be sure to check the ingredients list to see what type of cheese is being used.

The Case Against Vegan Pizza

When it comes to vegan pizza, there are a lot of different opinions out there. Some people argue that it is a healthy alternative to traditional pizza, while others argue that it is not as healthy as it is often made out to be. So, what is the truth?

Let’s start by looking at the ingredients in vegan pizza. Most vegan pizzas are made with a plant-based cheese, which is often soy-based. Soy can be a controversial ingredient, as some people argue that it is not healthful for humans to consume. Additionally, vegan pizza often contains vegetable oils, which are high in unhealthy fats. Finally, many vegan pizzas are also made with white flour, which is not as healthful as whole wheat flour.

The bottom line is that vegan pizza can be a healthy option, depending on the ingredients used. If you are looking for a healthier pizza option, it is important to choose one with whole wheat crust, plenty of veggies, and not too much cheese.

-How do I know if a pizza is vegan?
The best way to know for sure is to check the label or ask the restaurant. However, you can usually tell by looking at the ingredients list. If a pizza has cheese, milk, eggs, or other animal products, it is not vegan.
-Is vegan pizza actually healthy for you?
It depends on the ingredients. A vegan pizza made with whole wheat crust, vegetables, and plant-based cheese can be a healthy option. However, a vegan pizza made with white flour crust, processed cheese, and lots of sodium can be unhealthy.
-What are some good toppings for vegan pizza?
Some good topping options for vegan pizza include vegetables like mushrooms, onions, peppers, and tomatoes. You can also top your pizza with plant-based cheese or add some spice with crushed red pepper flakes.

If you are vegan or are trying to eat healthier, you may be considering vegan pizza. However, you may be wondering if it is really as healthy as it claims to be. Below are some tips to help you make an informed decision.

Second, consider the calories. Vegan pizzas can range from about 300 to 800 calories per slice. If you are eating a vegan pizza for lunch or dinner, you will want to choose one that is on the lower end of the calorie range.

Third, look at the sodium content. Most vegan pizzas contain between 200 and 600 mg of sodium per slice. If you are trying to watch your sodium intake, you will want to choose a pizza with less than 400 mg per slice.

By following these tips, you can make sure that you are choosing a vegan pizza that is both healthy and delicious!

Vegan pizza is often thought of as a healthier alternative to traditional pizza, but is it really? Let’s take a closer look at the ingredients in vegan pizza and see how they compare to their non-vegan counterparts.

When it comes to fat content, vegan pizzas are usually lower in saturated fat and higher in healthy unsaturated fats. For example, a slice of dairy-free cheese pizza has about 5 grams of fat, while a slice of regular cheese pizza has around 8 grams of fat. As for sodium content, both traditional and vegan pizzas can be high in sodium depending on the type of sauce and toppings used.

So is vegan pizza really healthy for you? It can be! Just be sure to choose a brand that uses healthy ingredients like whole wheat dough, fresh veggies, and dairy-free cheese.

Many people think of veganism as a healthy lifestyle choice. However, not all vegan foods are created equal. Some vegan foods, such as deep fried foods or processed meats, can be just as unhealthy as their non-vegan counterparts. So, what about vegan pizza? Is it really healthy for you?

To answer this question, we need to take a closer look at what goes into a vegan pizza. Most vegan pizzas are made with a combination of vegetables, plant-based meats, and dairy-free cheese. Some also contain nuts or seeds.

So, overall, vegan pizza can be a healthy choice. It is packed with nutrients and can be lower in saturated fat than non-vegan pizzas. Of course, as with all food choices, it is important to moderate your intake and to choose toppings that are not loaded with calories or unhealthy fats.