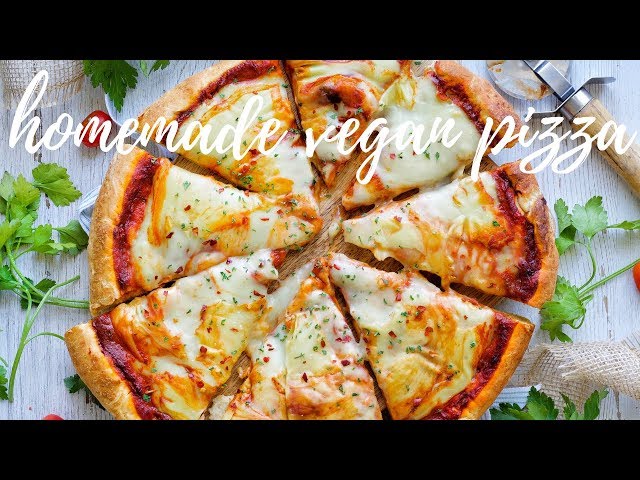 We know that veganism is on the rise, with more and more people looking to ditch animal products for a more ethical and sustainable lifestyle. But what about cheese pizza? Is it still vegan if it’s made with, well, cheese?

If you’re vegan, the answer to this question is probably a clear “No.” The cheese used in traditional cheese pizzas is usually made with cow’s milk, which disqualifies it from being considered a vegan food. However, there are plenty of recipes for vegan-friendly cheese pizzas out there!

In this blog post, we will explore some of the best vegan cheese options for making your next pizza. We will also provide a few recipes for delicious vegan cheese pizzas that you can try at home. So whether you are looking for a new and exciting recipe or just want to know if your favorite food is vegan-friendly, read on for all the details!

In recent years, veganism has become more popular, with people eschewing all animal products for ethical or health reasons. But one food that still causes confusion is cheese pizza – is it vegan?

Some vegan cheeses are made from soy milk, nut milk, or coconut milk. Others are made from a combination of plant-based ingredients such as oils, herbs, and spices. Vegan cheese can be bought in most supermarkets, or you can make your own at home.

The Case for Cheese Pizza

There is a common misconception that cheese pizza is not vegan. This is because cheese is made from milk, which comes from animals. However, there are many types of cheese that are made without using any dairy products. These cheeses are made from plant-based ingredients, such as nuts, soy milk, and coconut milk. As a result, cheese pizza can be vegan.

There are many reasons why someone might choose to eat vegan cheese pizza. For one, it is better for the environment. Dairy production requires a lot of resources, including water, land, and energy. It also emits greenhouse gases into the atmosphere. Furthermore, vegan cheese pizza is cruelty-free since no animals are harmed in its production.

If you’re looking for a delicious and ethical option, look for vegan cheese pizza the next time you’re at the store or restaurant.

The Case Against Cheese Pizza

The case against cheese pizza is that it contains dairy products, which are not vegan. Pizza dough is made with flour, water, and yeast, and the sauce is usually made with tomatoes, garlic, and herbs. But cheese is the non-vegan ingredient in pizza.

There are a few different types of cheese that are commonly used on pizza, including mozzarella, cheddar, and Parmesan. Some vegans argue that cheese made from plant-based milk is acceptable, but this is a matter of personal preference.

The Science of Cheese Pizza

Cheese is made from milk, which is an animal product. However, there are some plant-based milks that can be used to make cheese, such as almond milk or soy milk.

The other main ingredient in cheese pizza is dough. This is usually made from wheat flour, water, and yeast. However, some vegan doughs are made with vegetable shortening or olive oil instead of butter or dairy products.

The Ethics of Cheese Pizza

So, what is the truth? Is cheese pizza vegan or not?

Ultimately, the decision of whether or not to eat cheese pizza as a vegan is a personal one.

The Health Benefits of Cheese Pizza

Cheese pizza is not vegan. However, there are some health benefits to cheese pizza that may make it a good choice for some people. Cheese pizza is a good source of protein and calcium. It also contains other nutrients such as phosphorus, vitamin A, and vitamin B12.

The Health Risks of Cheese Pizza

There are a few health risks to consider when eating cheese pizza. First, cheese is high in saturated fat, which can increase your cholesterol levels and increase your risk of heart disease. Cheese is also a source of sodium, which can lead to high blood pressure if you eat too much of it. Finally, some cheeses are made with rennet, an enzyme that is derived from the stomachs of calves. Some vegans object to eating rennet because it involves the killing of animals.

The Environmental Impact of Cheese Pizza

The environmental impact of cheese pizza is significant. Cheese is a dairy product, and the dairy industry is a major contributor to greenhouse gas emissions, water pollution, and deforestation.

The production of cheese requires large amounts of water and energy. It also generates a lot of waste, including methane gas, which is a greenhouse gas that contributes to climate change.

The good news is that there are many delicious vegan cheeses on the market that have a much smaller environmental footprint than dairy cheese. So, next time you’re in the mood for cheese pizza, consider choosing a vegan option.

The Economic Impact of Cheese Pizza

In recent years, there has been an increase in the number of people following vegan diets. This means that there is a growing demand for vegan-friendly products, including cheese pizza. However, many people are unaware of the economic impact that cheese pizza has on the dairy industry.

The dairy industry is a major contributor to global greenhouse gas emissions. Cheese pizza is responsible for a significant amount of these emissions, as it is made with dairy products such as milk and cheese. For example, the production of one kilogram of mozzarella cheese emits approximately 7.3 kilograms of carbon dioxide into the atmosphere.

In addition to its contribution to greenhouse gas emissions, cheese pizza also uses large amounts of water and land. For example, the production of one kilogram of mozzarella cheese requires approximately 502 liters of water. This is equivalent to the amount of water that an average person uses in an entire day.

The high demand for cheese pizza also has a significant impact on animal welfare. The dairy industry is responsible for a large number of animal welfare issues, including cases of severe abuse and neglect. In order to meet the high demand for cheese pizza, dairy farmers keep cows in cramped and dirty conditions and force them to produce more milk than they would naturally produce. This can lead to a range of health problems for the cows, including mastitis (a painful infection of the udder) and lameness (a condition caused by overuse).

So, next time you order cheese pizza, remember that it comes at a cost – both to the environment and to animal welfare.

The Future of Cheese Pizza

While there are many types of cheese Pizza, the most popular variety is made with mozzarella cheese. Vegan cheese is a type of cheese made without the use of any animal products, including milk, butter, or rennet. There are many brands of vegan cheese on the market today, and most grocery stores carry at least one type. While vegan cheese does not taste exactly like dairy cheese, it can be a delicious and healthy alternative for those who are looking for a cheese Pizza that is free of animal products.