Can You Cook Naan on a Pizza Stone? 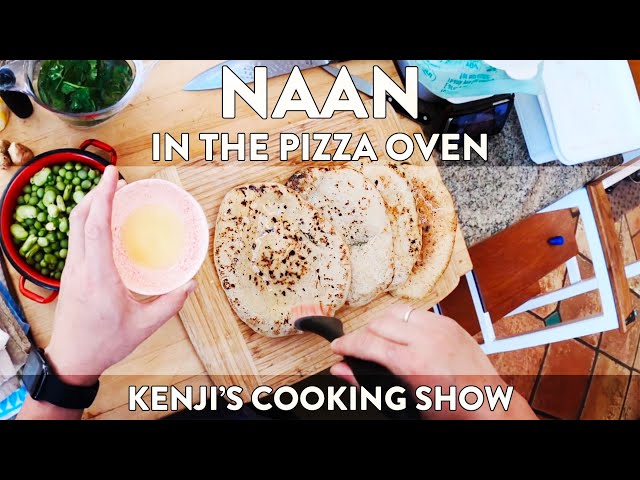 Have you ever wondered that can you cook naan on a pizza stone? Well, the answer is yes! Keep reading to find out how.

Pizza stones are a great way to get a crispy crust on your pizza, and they can also be used to cook other breads like naan. Naan is a traditional Indian flatbread that is typically cooked in a tandoor, or clay oven. However, you can easily cook naan on a pizza stone in your home oven. Just follow these simple tips and you’ll have delicious, authentic-tasting naan in no time!

What is a Pizza Stone?

A pizza stone is a large, flat, heat-resistant stone that is used to cook pizzas and other foods in a brick oven or a home oven. The stone absorbs the heat of the oven and transfers it evenly to the food, resulting in a crispy crust and even cooking. Pizza stones are available in a variety of shapes and sizes, and can be made from materials such as ceramic, stone, or cast iron.

The Benefits of Cooking Naan on a Pizza Stone

If you love Indian food, then you’ve probably tasted naan – a delicious, flatbread that is traditionally cooked in a tandoor (a clay oven). Naan can also be cooked on a grill or in a skillet, but did you know that you can also cook it on a pizza stone?

Cooking naan on a pizza stone has several benefits. First, it helps to create a crispy, delicious texture. Second, it prevents the naan from sticking to the stone – so no more scrubbing! And third, it ensures even cooking throughout.

So if you’re looking for a new way to enjoy your naan, give cooking it on a pizza stone a try!

How to Cook Naan on a Pizza Stone

Naan is a delicious, traditional Indian flatbread that pairs perfectly with curry dishes. Naan is usually cooked in a tandoor, or clay oven, but it can also be cooked on a pizza stone. Pizza stones are great for cooking naan because they absorb the moisture from the dough and help to create a crispy crust. Here’s how to cook naan on a pizza stone:

1. Preheat your oven to 500 degrees Fahrenheit.

2. Place your naan dough on a lightly floured surface and use a rolling pin to roll it out into a thin, even circle.

3. Place your pizza stone in the oven and let it preheat for 30 minutes.

4. Carefully transfer your rolled out naan dough onto the hot pizza stone and bake for 2-3 minutes, or until the dough is crispy and golden brown.

5. Remove from the oven and enjoy!

Tips for the Perfect Naan

Naan is a delicious, traditional Indian bread that is perfect for sopping up stews and curries. It can be made in a variety of ways, but is most commonly cooked in a tandoor, or clay oven. If you don’t have a tandoor, no worries! You can still make naan at home using a pizza stone. Here are some tips to help you get the perfect naan:

-Preheat your oven to 500 degrees Fahrenheit (260 degrees Celsius). If you have a pizza stone, place it in the oven while it’s preheating.
-While the oven is preheating, mix together your naan dough. You can find recipes for naan dough online or in Indian cookbooks.
-Once the dough is mixed, divide it into 8-10 balls and put them on a lightly floured surface.
-Roll each ball of dough into a thin circle. The thinner the better!
-Carefully transfer the rolled out dough onto your pizza stone. Make sure to use an oven mitt or pot holder, as the stone will be very hot!
-Bake for 3-5 minutes, or until the naan is golden brown and cooked through.
-Remove from oven and enjoy!

Yes, you can cook naan on a pizza stone! In fact, it’s one of the best ways to get evenly cooked, crispy naan. Just be sure to use a light cooking spray or oil to prevent the bread from sticking, and preheat your stone for at least 30 minutes before cooking.

If you want to learn more about cooking naan on a pizza stone, there are a few resources that can help. The Kitchn has an informative article on the subject, and Serious Eats has a comprehensive guide to baking naan in a home oven. You can also find helpful tips and tricks on the cooking website eHow.

Naan is a delicious Indian flatbread that can be cooked in a variety of ways. One popular method is to cook it on a pizza stone. This provides a crisp, chewy texture that pairs well with many Indian dishes.

If you’re thinking about cooking naan on a pizza stone, there are a few things you should keep in mind. First, it’s important to preheat the stone in the oven before adding the naan. This will help ensure that the bread cooks evenly. Secondly, you’ll need to use a bit of oil or ghee (clarified butter) to prevent the naan from sticking to the stone.

Once you’ve prepped your stone and naan, cooking is easy! Simply place the bread on the hot stone and let it cook for 2-3 minutes, until it’s golden brown and crispy. Enjoy!

We would like to thank the following people for their contributions to this guide: